Either with an inverter (that produces 120 VAC) or with a 12 v DC laptop power supply like this one . 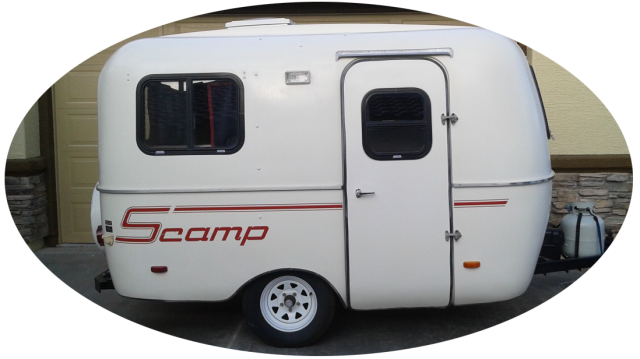 Once one determines how they are going to camp, then reduce power consumption by things like LED lighting which you've done, and using portable batteries for recharging phones/devices then the next steps. I'd recommend going to twin 6v golf cart batteries at an early stage of moving to an off-grid system. Depending on camping style, sometimes that's all one needs.

Adding portable panels first are a good option, because they can always be used with a fixed system later and most of the time they are all that is needed. I used two 15w briefcase panels for almost 10 years and several trailers and it met our needs at the time. The big advantage of portables is you can track the sun which the roof systems aren't good at. Because of this you need way less panel in the portables, can save a good bit of money over a larger fixed panel system, and you don't have to come up with a permanent mount. You can also move the panels to a location that has sun when the trailer spot is shaded, I used 25' extensions for times when needed.

Some disadvantages of the portables are that you have to bring/store them, they have to be setup, you don't charge while driving or maintain batteries in storage.

The TriMetric is one of the best out there and ability to monitor battery condition as closely as that allows will be phenomenal in determining if the system is too light.

I don't think you're anywhere near a minimal system with that large a portable panel and the accessories you've chosen. Unless you are or become a high energy user, it will be quite a bit more than sufficient. It will be good that it could eventually go on as a permanent roof mount down the road as well. The only thing I don't see is what you have as the foundation in the trailer battery. If it is a single 12v, the only change I'd look at next would be the twin 6v.

I'll look forward to how it all comes together. 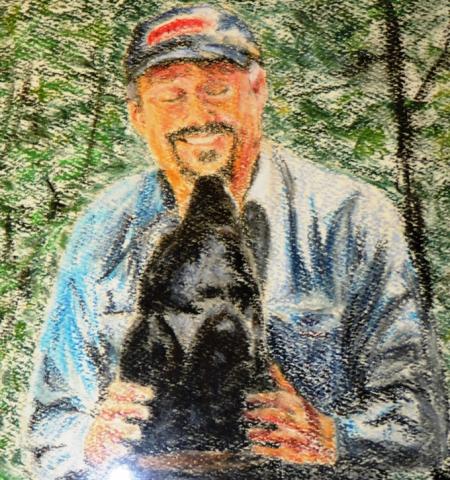 "Some disadvantages of the portables are that you have to bring/store them, they have to be setup, you don't charge while driving or maintain batteries in storage.."

Greg am I mistaken or aren't the batteries charged via the trailer connector while driving?

I don't (charge through the trailer umbilical connection).

And even when the rig is wired to charge the trailer battery from the tug, it is often not wired properly or sufficiently to get a good charge (or to prevent the tug's battery from going dead while parked for extended times and connected to the trailer).

Maybe is the best answer. Gordon pointed out good examples of why battery charging by tow vehicle is not necessarily present or good. I remember a dire situation in a bad snowstorm where we ran our battery down running heater thinking the tv would recharge it. We got to our next destination and no charge. 30A fuse on converter had blown and shut down tv charging line. Solar would have fixed it as there was sun all the next day driving, much more reliable than your tow to recharge. Also, how much charge is your tv putting in your battery while eating lunch, etc?

Thanks for the comments Greg.. very helpful.

I did mean to mention the battery but I forgot.

Its a single group 27.  I'll see how it goes, I don't expect to boondock for long periods, there is limited real estate on the trailer tongue unless I build a custom battery mount, and I would like to stay pretty close to where I am with tongue weight (or more precisely, where I will be with the planned mods), so I would be happy if I could make the current battery work.  But you're right that more storage for electrons might be the best thing to do next.

I like the idea of the roof mount too.. Each has its advantages and disadvantages but together you get all the benefits.  And a roof mount it somewhat harder to steal. I am designing things so I can use roof mount, portable, or both.

I expect I will make up an extension cable (another 10-15 feet) for those times I need to chase the sunshine. I have 30 feet of 10 gauge tray cable in the shop, so I want to use it and If I need to use the extension, I will just have to accept that losses will be higher.

I used 10 Ga on my 25' extension cables for the portables. Never worried about the loss, but some that have measured it seem to indicate it's minimal. At Quartzsite the last few years I pulled my battery down running furnace overnight to 11.9 to 12.2 range and was back up at full capacity by 11 to 11:30 with the 2 15W portables. The folks with the 150w + roof panels would beat me by about an hour to full.

Looking forward to the week at Quartzsite this year from a solar test standpoint. Currently have the new system with 160w on the roof, twin 6v batteries, and the Samlex controller. http://www.samlexamerica.com/products/ProductDetail.aspx?pid=60  This will be the first off-grid trip in the new rig, so I'll be doing a bit of testing and checking. We are all LED and use the Anker portable battery chargers

for our device charging so it's not coming off the trailer batteries. Depending on the year at Quartzsite, you can use a fair amount of furnace overnight.

Instead of the suitcase model, I decided to start with the Renogy RNG-100P single panel with the TriMetric TM-2030 usage meter and matching SC-2030 PWM Solar Charger. Initially, I will be using the panel on a 15 foot cable in a semi-portable configuration.  I might put it on the roof at some point and then get a second panel of some sort (such as the Renogy suitcase) to supplement the roof panel. This polycrystalline panel is a little less than 40 x 27 inches so it is not too hard to handle even if not as convenient and portable as the suitcase model., and it will fit on the roof better if I decide to so that. The moncrystalline version is longer and narrower, and 17% more expensive .  Poly is a little less efficient than poly, and the polycrystalline version I bought has a surface area of 1060 square inches while the mono one is a little less (987 sq in.). Other than that difference, the specs such as power output are almost identical. Compared to suitcase model, the poly panel is less than half the cost of the foldable suitcase with charge controller (with the same wattage) and only 16.5 lbs vs. 27.7 lbs.

I breadboarded the setup (pre-install) and here is the results of my first day of testing with the single 100 watt panel:

First off please note that I can’t seem to find reliable specs for my group 27 sized battery.  It’s amp hour (AH) rating at a slow discharge (like I expect to have with the trailer) is between 66 and 96 Amp Hours. The listed RC capacity is 160 minutes.  My best guess is around 90 AH and the % full numbers in the following is based on that assumption.

Battery was fully charged and indoors so it was at near optimum temperature for maximum performance.

I ran the bulb for one hour, drawing 1.43 AH. Meter showed 98% battery remaining*.  Next I let the battery sit for four hours with no charging, and the only load was the meter which is a miniscule 16 ma.

Then I ran the same bulb overnight for nine hours.  This is similar to running a small RV furnace at a 40-50 duty cycle for the same amount of time. Meter then showed: total draw at 14.3 amps (1.43 amps for ten hours total).  Based on the battery capacity assumption of 90 AH, the meter showed the battery at 84%.  Remember that you want to stay above 50% usage and even higher is better.  At this very light level of use, I expect you could get as much as 2.5  days out of the battery without charging it at all.

Next day the conditions were close to ideal for the solar (PV) panel, sunny and cold.  I did have some morning shading from a distant tree and a cord that was longer than recommended from the panel since it had to run outside (about 22 feet), but I still expect that I got near the max you could expect from the panel.  I also repositioned it as needed, that seemed to boost the amps 15% at times.

BTW, once the battery is at full charge and the sun is still good, you have, in effect, electric going to waste.  My meter tells me that I have excessive power. That is a good time to top off cell phone charger or the like.  At 1400 hours, I turned the 1.4 amp load (light bulb) back on and the meter said I still had an additional 3.5 amps I could use without taking anything from the battery.

thanks for the test report, you approached it very well. I was a bit concerned on time back to full charge but then I remember you're in NC. Probably cut that time in half out here in AZ!

Battery bank is definitely your next upgrade so you can get in excess of 220 ah and ability to take it past 50% discharge without damage. Roof mount and another supplementary portable panel for longer trips would be good as well.