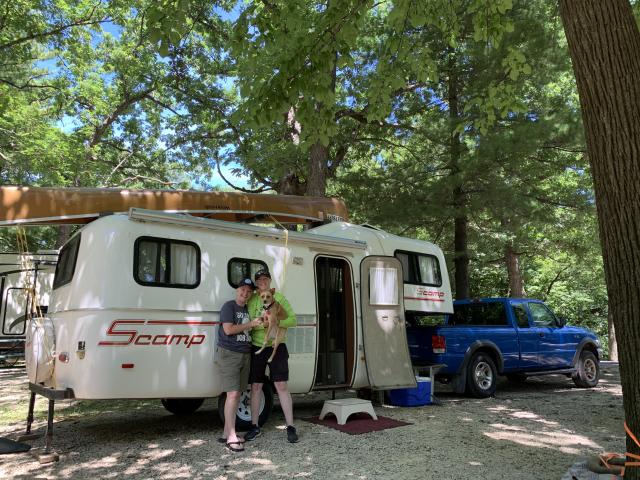 Hi all! New members here. We bought our 1999 Scamp 19' Standard from my uncle (who is a lifetime member here) a few years ago. I have been reading this forum trying to glean some advice about potential tow vehicles but thought I'd now reach out directly myself.  We currently tow it with a 2000 Ford Ranger and it does a fine job. The truck bed isn't too tall or wide and you hardly know you are pulling anything (except going uphill).  We would like to replace the Ranger at some point in the near future with a newer vehicle but are concerned that newer trucks sit so high that we will have trouble finding something that will work as well to pull the 19. My uncle said that he originally tried a 1999 or 2000 Toyota Tacoma but was not impressed with its towing capacity so traded it in for the 2000 Ranger and was much happier. He had a local shop fabricate his hitch in the bed of the truck so we have no idea what we are doing in that regard for when we begin looking for a new truck! We did some preliminary searching about a year ago and the dealers had no idea what we were talking about and just wanted to know how heavy the Scamp was and thought you could put a hitch in any truck bed without concern.  We know that not to be true.  The taller trucks do not seem to be an option or if they are, would require a lifting of the axle of the Scamp. We aren't too excited to go that more difficult and likely spendy route. We would like to be able to install the 5th wheel hitch with rails that Scamp sells or something comparable and not have to make any other adjustments.  We have just started looking for trucks but here are a few we are considering (we are considering the newest models to only a few years old):

Subaru Baja...though I think them releasing a new version is just a rumor.

GMC Canyon, Honda Ridgeline, and Ford Maverick...though I think these might have a little too high of a truck bed)

Does anyone have experience towing as a fifth wheel with the newest/newer versions of any of these trucks?  I would really like to hear what you think,   what truck you chose to tow with and why, as well as if you are happy with your choice.  Also, if you could include what type of hitch you have in the truck bed, I would greatly appreciate it. Sorry for the long post and thanks in advance for any help or advice you can offer!

PS- I suppose I should also be getting advice on trailer brakes and how to get them installed in the new truck but one thing at a time I guess:))

I have pulled a  19' Scamp with two different Nissan Frontiers. The first was a 1999 Standard without Air, but with toilet and shower. That Frontier was a 2014. We now have a 19' Deluxe, fully equipped, pulled by a 2021 Frontier. When I bought the first Scamp, I bought a 2003 Toyota Tacoma to pull it. We find that the Nissan is more comfortable as a tow vehicle, although the Toyota was slightly more economical than the first Nissan. The second Nissan has an updated power train with 3.8 Liter V6 and nine speed transmission. It does a fantastic job of towing the Scamp. I use a Prodigy Brake Controller that has a cable to make it plug and play

Thanks for the information, Dennis! I really appreciate it. What type of hitch do you have in your truck bed?

Good to know there are several options...more than I thought when I first asked this question! 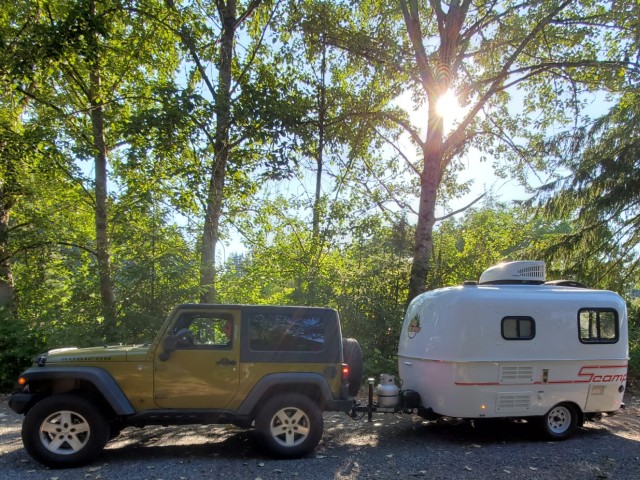 May want to look at the new Maverick.  4k tow rated with the tow package, and slightly smaller than the Ranger.

Use a Curt Triflex brake controller that stops it very comfortably.

I attached the hitch to the

That's two people already that have said they tow with the Frontier. Thanks for the info on the brake controller too. You started to say how you attached the hitch but I think your sentence got cut off?

Thank you for your help!

Haha, I did post an incomplete sentence. Bad proofreading on my part.

I installed a Scamp 5th wheel hitch and rails kit like the one sold on the Scamp Parts Store. Those units are made by Reese.

I spoke to the installers at Scamp several times for advice. They told me that they just bolt the rails through the bed of the trucks when they do the installs with no attachment to the frame. They claimed to have never had a problem doing it that way. I didn't feel comfortable with that, so I attached my hitch rails to the frame at 4 corners.

A word of advice. Don't try installing one of these hitches to your truck frame without a kit unless you have good fabrication skills.  eTrailer sells Reese hardware and kits, too.

Pull my 19' with a 2021 Jeep Gladiator.  Works great!  Get the Gladiator Sport S model with the max tow package as that has the maximum towing capacity.   Redac brake controller from quadratec is an easy plug in install.   Drove the truck up to Scamp in MN and had the factory install the hitch.