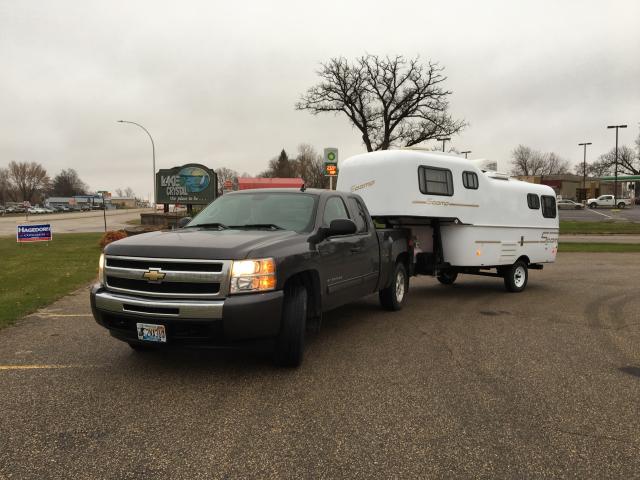 I was reading this forum and saw a thread about being a certain age and ordering a new Scamp 19. I saw a few replies that people related their Scamp 19 experience and it occurred to me this would be the place to go for some advice. I have a 2016 Scamp 19 Deluxe that I purchased used in 2018. I currently tow it with a 2010 Silverado LT and everything sits nicely. The truck isn't too tall in the rear and the trailer rides level. When we make quick stops to overnight we don't have to unhitch. I would like to replace the Silverado at some point with a newer vehicle and I'm concerned that newer trucks sit so high that I'll have trouble finding something that will work well for the Scamp. I would sure like to hear what others think about this and what you have chosen to tow with and why.

All the full size 4x4 PU's have high bed rails, you might find a 2WD version that may not be too tall but good luck. The full size truck have manufactured bed rail kits which most Hitch shops want to only install now. (I guess liability issues.) The Frontier and Tacoma which are good choices but require custom bed rail installs (no factory kits). I'm not sure if the Ford ranger has a stock bed rail kit, but after looking at one at the dealer a while back the 4x4 ranger appears to be just a narrow F150 that has high bed rails. Your best bet is to try to find a good hitch shop who deals with a lot of bed hitches (horse trailer shop) and see if they have installed a bed hitch in a mid size truck. I put 150K on a Frontier mostly towing with no issues, not outstanding gas mileage but a good solid truck  for towing a S-19. After after more than 15 years Nissan has redesigned the truck so I can't speak to the new trucks. (I installed my own hitch in my frontier as many others did.) Just my opinion YMMV. Good luck

Eddie, Thanks for your thoughtful reply. I appreciate your opinion.

I am in the process of installing the 5th wheel rails in a second Tacoma. The first was a 2013, and I bought the generic 5th wheel kit from Scamp and had it shipped to Vermont in 2013. The second one is a 2021 and I decided not to remove and re-use the custom parts that were needed then. The 2013 went to my son, so I left it as is, just in case he might want to tow my Scamp some day. I made sure that the new Tacoma bed is identical to the old one, so the process would be the same, or close. In the old one, I attached the front rail to the frame using the front pair (there are three pairs) of the bed mounting bolts. I did encounter a glitch, though this time. One of the front bed mounting bolts (self threading, fine pitch) was impossible to remove due to some damage of the end of it, and I had to re-think things a bit. Now the rear rail is attached using the middle pair of bed bolts and two more bolts through the bed and the other rail is attached to the bed with four bolts. The rails are connected with two strips (.25 x 1.5 in. 2 ft. long) of steel, so the loads are better distributed to the glass reinforced sheet molding compound (SMC plastic) bed. Using the second pair of the bed bolts forced me to move the hitch back by six inches, from an inch or so in front of the axle to 5 or six behind the axle. I do not expect any noticeable change of towing dynamics, but there will be more space to walk between the two vehicles when hooking up, and more clearance for the bumper corners when making tight turns.

Thanks for sharing your Tacoma experience. I like your idea about leaving a set of rails on your son's Tacoma. I will probably end up keeping my older truck and do the same. Where did you get the rails from? I wonder if Scamp does their installs (like you have) by attaching the front rail to the frame?

I bought the rails from e-trailer, they had a pair due to damaged packaging ($78 down from ~$95). The truck-specific kits cost much more. When I ran into the glitch I mentioned, I thought of contacting Scamp, but then I just went ahead anyway.

As far as how long I might be towing and camping, it will be as long as I can still do the hookups and backups. When I do not want to do the climbing into the bed to connect the chains, I'll get a little step stool. What I would like to have is a light weight hitch along the lines of this: https://www.etrailer.com/Fifth-Wheel-Hitch/Andersen/AM3200.html I hope I can have one fabricated for much less than $700, though. The one Scamp sells weighs about 60 lbs. but the Andersen is about 30 lbs or it could be even less.

I got one of these so I can reach my hitch and chains https://www.amazon.com/gp/product/B07KF2JQR9/

It's handy for packing and organizing the truck bed too.

I just tried to upload a picture of the truck bed, but no luck. Do not know why.

I'm not sure why photos didn't post here. I just hunted you down over on Fiberglass RV and found your detailed post showing your truck bed photos.

I was actually thinking of suggesting to look on the other forum. The only difference in the new  picture is that the rear rail uses the middle pair of bed mounting bolts. And, the new truck has more stuff under the bed that was getting in the way! 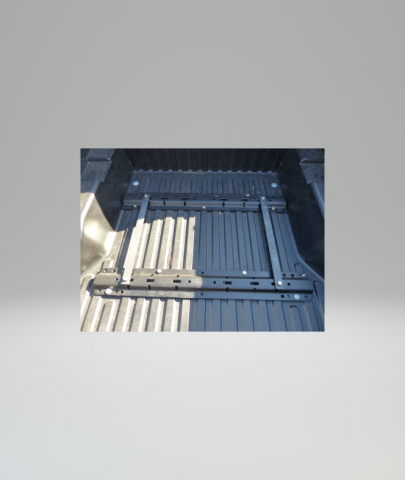 All it took was following the instructions, I guess...