On September 22nd of this year, my wife and I drove to Backus to pick up our long-awaited Scamp 16 (Layout 6). We own a Subaru Outback with the 2.5-liter (non turbo) engine, which is listed as having a 2700 lb. tow capacity. We had decided to use the Subaru as our tow vehicle on our three-week journey home and see how it worked out. The Outback came with an original equipment Class 2 hitch and four prong connector. We added a seven-prong connector to the car to take care of the Scamp’s electrics.

On the drive home we realized that the Outback was not the ideal vehicle for towing a Scamp 16. The Outback did well in the flat land of the Midwest, but once we started hitting hills the four cylinder just did not have the power needed. We were mostly sticking to backroads and kept our speed below 60. At outside temperatures in the mid to upper 70’s the oil temperature stayed in 218-224 range, but as we started hitting interstates for the most direct trip through Kentucky and eastern Tennessee, I had to work to keep the oil temps down to the mid-230s. It was a struggle keep at 65 MPH while the other traffic was zipping by, working the paddle shifters to keep up the RPMs. We were glad to finally get home. I calculated our average milage while towing to be around 18.2 MPG; without the camper the Outback gets 32-34 MPG on the highway.

We have since picked up a new tow vehicle: a 2017 Nissan Armada. It is really overkill for a Scamp, with a towing capacity of 8500 lbs., 390 hp, and four-wheel drive, but I know it will not have a problem pulling and we found it at a great price. The only issue is gas milage. On a mix of interstate and two lane I am averaging 20-21 without the Scamp. I have not done enough distance with the camper to get my milage, but it shouldn’t be much difference than the Subaru gets while pulling. We will continue to use the Outback as our main transportation because of the gas milage and the Armada as our secondary and tow vehicle.

That was a wise TV change. The 16's start 2200 to 2600 before you add anything. That may be the Deluxe tho but no need to cut it so close. What was your actual GW on the decal from Scamp? Again,  good call and congratulations!

The Natural 2.5 in the Outback is a good package as a daily driver but very tow limited..  We have a 2021 Onyx XT with the 2.4 turbo and heavy duty trans of the ascent and did not run into the issues you saw  but even 260HP and HD 8Spd CVT would likely be maxed out,  We tow a 2022 Casita 17Sd at close to 3,000 lb and 310 Tongue ( Weighed with scales ) and are pleased so far after pulling 5,000+ miles in even texas 102 deg temps and 65 MPH normally with only an oversized trans cooler But that would be my Max We will do the rockies in the spring to really test the Outback XT in all but summer temps.

Enjoy your 16 Scamp. and the security of the Armada

Ours was a situation of using what you have.  We had a older Toyota Sequoia when we ordered our Scamp, but age and mileage took its toll on the big Toyota before the Scamp was ready, so we were left with our 2022 Outback as a possible tow vehicle.  As noted, we found that the Outback could readily handle towing the Scamp 16 on flat land-two lane roads, but I would rate that as a maximum.  I would have to give it a thumbs down when hills or interstates are involved.

The listed dry weight on the registration is 1860 lbs.and the maximum gross vehicle weight (axle maximum) is 3500 lbs.  We tow it dry and with less than 150 lbs. of personal goods in the Scamp.  We have not weighed the loaded camper yet, but even with the options it should come in well under the advertised tow capacity of 2700 lbs. for the Outback if the 1860 lbs. is anywhere near correct for a dry, base model Scamp 16.

I just wanted to post my review so others who might consider towing a Scamp 16 with an Outback 2.5 liter would know my experience while doing the same.  Since getting the Armada the Outback is back to the role of our everyday car. 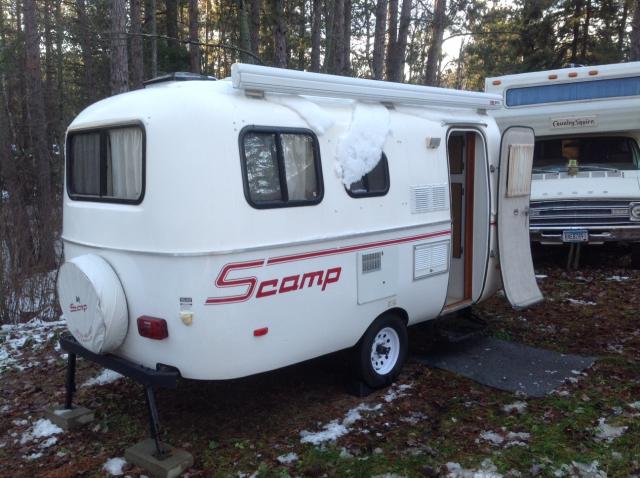 We also started out towing our 16 with the 2.5 Outback .  We later added a Chev Silverado 5.3 for the tow vehicle.  Comparing the two in my mind the Outback didn't cut it, just as you said.  With the Outback you really knew the 16 was back there.  With the Chev you hardly know the Scamp is back there.  Also it is so nice to have the space the truck gives you for anything you wish to bring with.  We still have the Outback as a daily driver and enjoy it and the mpg very much. It also really goes in the snow our area throws at us.

Fellow Scampers.  Thank you for your detailed reviews of your tow vehicles.  One of the most frequent questions on the various Scamp websites is "Can I tow a Scamp with a xxxxx."  For every "No" there is someone that says, "We tow it all the time with our xxxxx and don't have a problem."  People don't indicate where they are towing their Scamp:  long or short trips, flat or hilly roads, windy or sheltered areas, Interstates or small highways, and the towing speed.  You can tow a Scamp with almost anything but that doesn't mean it is easy on the vehicle or safe.  I worry that there are too many people out there towing trailers well below the speed limit and being a safety hazard.  Also, people focus exclusively on the vehicle's towing capacity vs trailer weight.  However, they don't allow for the huge wind resistance of the trailer (like towing a parachute), which is hard to quantify.  Many people recommend having a towing vehicle with a much greater (maybe >50% more) towing capacity than the weight of the trailer and cargo.  People also underestimate their cargo weight.

Several years ago, I towed a used 16-ft Scamp Deluxe 900 miles back from a city in Minnesota with a 2005 Dodge Grand Caravan V6 with a factory 3500 lb towing package.  The van labored going up the hills along the Mississippi and in the Ozarks.  We got grumped at by a farmer in Iowa and yelled at by some people in a pickup in Missouri because we couldn't maintain the speed limit.  When I got home, I wanted to buy a Pacifica, which has more horsepower and gears than the Grand Caravan, as a new towing vehicle.  However, I thought it would not be powerful enough.  I found a used 2014 Dodge Durango V6 with a factory towing package and a rated 6,200 lbs towing capacity.  We have taken many 2000 mile round trips to Minnesota through the Ozarks, on Interstates, and on U.S Highways.  The Durango is an outstanding towing vehicle, although it is not as comfortable or versatile as a Grand Caravan, Pacifica, or some other vehicles.  I am glad that I bought it.

Lots of folks say they tow something with no problem. Problems are not just events that they experience. If you treat a vehicle that way, you are putting abnormal wear and tear on it that the motor wasn't designed for... instead of lasting 200 or 300 thousand miles it will wear out or experience a major failure much earlier in it's service life.