Well I have been busier than a 1 arm paper hanger today trying to get done last minute things to our Scamp before we leave for Alaska week after next.  I am documenting everything I wanted to change and pass on to you in case you wish to do something similar.  Like I said before, I can't believe that the Scamp Mfg. does not monitor these ideas we submit for all to do and incorporate them in their trailers, most of these ideas are simple but important to us and useful.  To me many, many of those I have seen on this board so far are so much worth doing and improving on, (I always have to re-invent the wheel) it seems to satisfy me.  But these ideas would be such great selling features to be presented to new buyers, further making their product the best in the country.

Enough for that:  Now, one of the things I accomplished today was cutting off my (Crank Handle for the tongue Jack) and welding a nut on it such as in the photos included in this post so that I can use my also NEW 18v 1/2" drive battery operated torque gun.  It takes less than 10 seconds now to raise or lower the tongue, and so much pleasure just to realize the 4 minutes it usually took and the skinned nuckles from hitting the gas fuel tanks is over, for good.

Here is what and how I did it to accomplish this today:

I had to rearange  the entire configuration of my Scamp tongue storage area, here are the reasons.

1) I wanted to use my heavy duty towinig stabilizers, (later Post) to use that levels my tow vehicle with the trailer and really stabilizes the trailer when being towed,  I have not yet had a tractor trailor move my Scamp from side to side as they pass us on the interstate highway at 60 MPH and I feel confident I will not need a (Sway Stabilizer) at a cost of much money.  Now the informaton on my stabilizer towing package will be posted later today or tomorrow.

I had to remove everything off the tongue and remount it for the stabilizer arms I will use, BUT, the battery box was mounted in such a way that I could not remove the lid of the battery box without forcing the box front ways to pull off the cover, then removing the battery was fun too!!!  So I moved the Battery box up forward about 1" toward the tongue for easier removal of cover for maintenance etc.  and redrilled it and mounted it to the tongue frame.  Someone at the Scamp factory must of been in a hurry to mount this box it seems, they must of had fun putting on the battery box cover!!

I had to move the Gas tanks, (two of them) forward, about 2 inches from where mounted so be able to assemble the brackets for the stabilizer arms you will see in next post.  NOTE:  Moving the gas tanks closer to the tongue jack make it difficult to use the handle of the tongue Jack without pushing back on the right gas fuel tank with the left hand as you crank up or down the tongue jack with the right hand!!  If you did not do this you would hit your knuckles on the  tank, and it takes about 4 minutes to jack up or down the Scamp to level or hook up to your tow vehicle from the level position when not connected to any vehicle. This sucked and I just was not going to do this any more, so I can't say I had this idea by myself, I read about it maybe in the archieve of this forum but I incorporate this idea into my way of doing it. 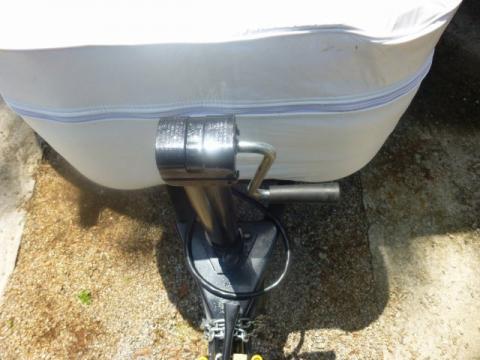 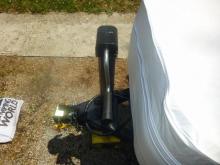 I cut off the old jack handle that was a PIA to me, right at the bend of the handle. (1)  I ground a little bit of the bend off so the shaft now left from the jack handle assembly was pretty straight.   The shaft for the jack handle is .500 -1'2" diameter. (2) I took a 1/2" threaded nut, I drilled out the nut to be 1/2" to have a slide fit on the shaft that was still left on the camper jack housing.  The outside dimension of the nut would be 3/4" for a 3/4" socket. (4) I welded the center of the new torque gun assembly nut as in the photo on the left with a solid pass for stability.  (5) Then I painted Ne newly welded nut assembly on the jack handle shaft it to match the rest of the new modified jack.  (6) I then went to Harbor Freight, bought a 18V, 1/2" torque gun, $117 on sale.  Put on a 3/4" socket after charging the torque gun battery and took a road test on my (affordable, automatic Jack Assistant), and it took not even 10 seconds to completely raise or lower the Scamp to highest or lowest position!!  I have no idea what a electric lift would cost but I can assure you that this works just great and the 18v gun can put on 330 ft. lbs. of torgue.   so now you can remove your tires on car, trailer etc. and not break your a$$.

I hope this leads you to consider doing, it will save your back, your patience and if the drive shaft of the jack gets a little rusty the 18v torque gun will not have a problem still working.  Set up for the camper, only minutes, no sweat any more and no more pushing back on the fuel tank to get clearance and stop hitting my knuckles on the tank.   Yesssssssssss!!

Photo on the right shows the new 18v torgue gun in position to raise or lower the tongue jack, very easily from now on. 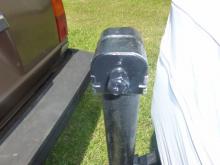 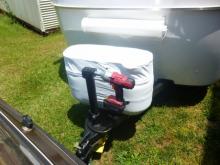 another view of the Toque gun set up ready to do the job I hated to. 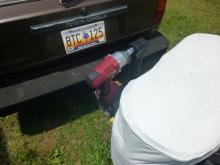 Thanks for looking, hope this works as good for you as me. 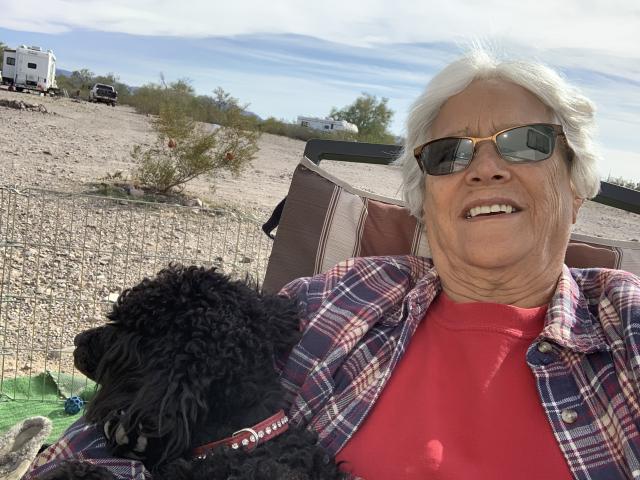 I so dislike rechargeable items as they never seem to be charged when I want to use them.

Some years ago I purchased a 12V torgue gun and carried it around for several years.  One day I went to use it out in my driveway and it had come apart in pieces.  I was shocked as it was simply stored in it's box in my tow vehicle.  I never expected it to rattle apart.  It never work correctly after that.  I had purchased it at Harbor Freight.

I've thought about purchasing another but from some other vendor and hopefully it'll be made much better.  One day I will and then possibly make a mod. like yours.  Thanks for tips and pictures.  Great job.